“Our base case remains that equities returns will be positive for 2019, although we now see a more limited upside. Retail sentiment has turned significantly bearish. Outlook for non-US economic growth is not as constructive,” Barclays’ Maneesh Deshpande said in a note to clients on Tuesday.

While the recent comeback in stocks provided some relief, the tumultuous 2018, especially the monster sell-off in December, has prompted Wall Street analysts to dial back their projections for 2019 in the face of a slowing economy, the ongoing trade battles and the uncertainty around the Federal Reserve’s monetary policy. The S&P 500 is up 2 percent in the new year, recovering from its worst year since the financial crisis. 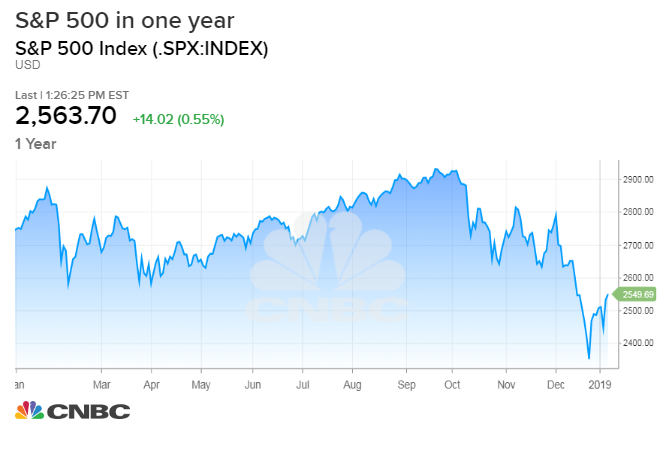 The price action in stocks “was exacerbated by mutual fund outflows and poor liquidity,” Deshpande said. “Mutual fund flows were significantly negative in December after being relatively modest in the fall. Market depth for S&P 500 futures is at all time lows indicating that risk capital provision by market makers is significantly lower.”

“The reduction of 2019 S&P 500 target is driven by a combination of a drop in EPS projection and earnings multiple. Our bottom-up EPS model forecast has declined substantially. Our fair value target for the P/E multiple has also declined driven by the drop in headline inflation and inflation volatility,” Deshpande added.